We had two adventures this weekend!  Friday night we went to The Mountain Winery and saw the Fab Four, a Beatles Tribute band.  They were pretty darn good.  They were very accommodating and allowed pictures so I was able to get some very nice shots.

Of course we took the “Concert Photo” that we always take at our concerts.

They were introduced by “Ed Sullivan.”  This guy was pretty funny as an impersonator.

They really try to make you feel like you are listening to the Beatles, complete with period appropriate costumes.

While the performers (Ron McNeil (John), Ardy Sarraf (Paul), Gavin Pring (George) and Joe Bologna (Ringo)) play all their own instruments and actually do the singing, I think that Gavin looks very close to George Harrison and Ron McNeil is a pretty close John Lennon.  Ardy Sarraf has Paul’s mannerisms down pat and at times resembles Paul.  Joe Bologna (IMHO) does not look at all like Ringo but he does a pretty good job of playing those drums and getting into the act.
I had never seen this at the Winery before but there was a “signer” for some hearing impaired people in the audience.  She was really good at getting the energy into her signing and was almost as much fun to watch as the show itself.

Here is “With Love from me to you.”

I tried to get some pictures of each of their costume changes.

I think my favorite of their costume changes is the Sgt. Pepper’s Band.  The costumes are so colorful. 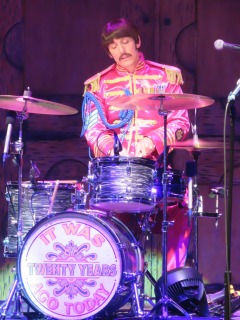 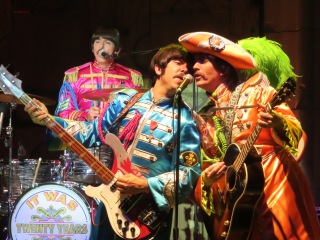 Here’s a bit of Sgt. Pepper:
Very moving rendition of “Imagine,” complete with the lighting of the crowd’s cell phones.  Perfect message for the things going on in this world. 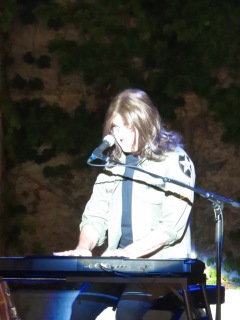 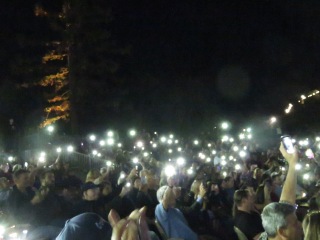 “George” did a moving rendition of “Here Comes The Sun.”  Don’t you think he looks a lot like the Beatle?  My husband was disappointed he chose that song as opposed to “While My Guitar Gently Weeps.” 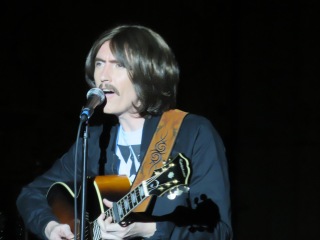 If you like the Beatles and have never seen the Fab Four, I would definitely recommend the experience.  It was the perfect intro for our next adventure, a trip to San Francisco to see the Summer of Love Expo at the De Young Museum.  That post coming soon!
How about you?  Like the Beatles?  Got a favorite song?  Share!