For the last 21 years, every September we’ve been making a pilgrimage to the Boulder Creek Golf and Country Club for a golf tournament that my husband and his best friend started.

In 1985 we had been married for about a year and I found an advertisement in the AAA magazine about a three day, two night stay on a golf course in Boulder Creek, California.  I knew my husband liked to golf and while I didn’t, I did love to spend some time reading and relaxing so I booked a mini-vacation for us.  It was a wonderful trip, but then the kids started coming so we didn’t get a chance to go back.

Fast forward 10 years and we went back down to celebrate the birthday of our friend, Tony.  My mom watched our two kids so we could get away. 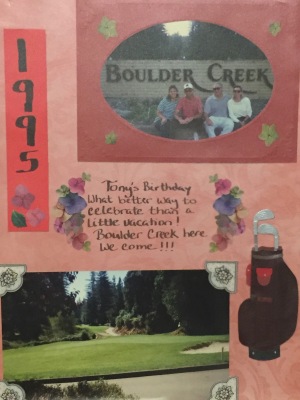 It was just the four of us but we had such a good time we decided right then to book another trip for the following year.  I was seven months pregnant with our third child in 1996 but we went down anyway and the guys thought that it might be fun to start a little golf tournament.
In 1997 the first Gentleman’s Invitational began.  There were five golfers and four of the wives came.  We brought our baby, Rachel, and she was so good. 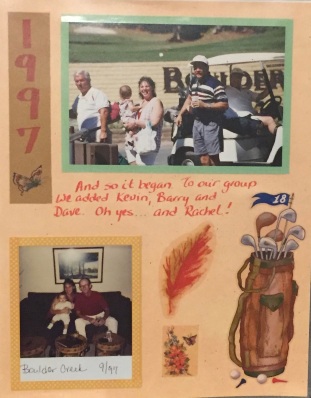 The age of computers had not fully taken over yet so the official scoring was done on a placemat in the restaurant.  My husband won that first year. 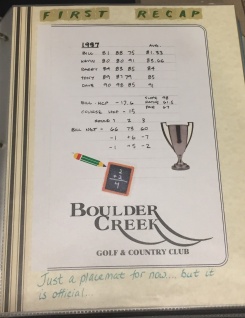 Since that time we have added some players and lost a few for one reason or another.  A couple of years my husband was not able to play because of his back issues but we usually went down anyway, just to enjoy the relaxing time with our friends.  How proud we were when our son took golf in high school and then began to come down and join the tournament as well.  We have had as many as 18 golfers!  Most of the wives come too and we have several traditions that we have formed over this time.
First, I try to take a picture of all the golfers at the start of each tournament:

Most times I ride in the cart with my husband for at least the front nine holes.  I take as many pictures of the golfers as I can without getting in their way.

The first night we are there some of us go to a restaurant we love called Scopazzi’s.  They are very accommodating for our last minute reservations and the food is delicious.  If you are ever down that way I highly recommend them. 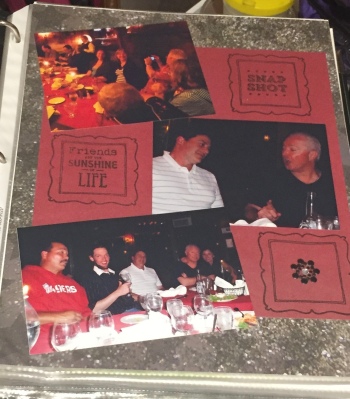 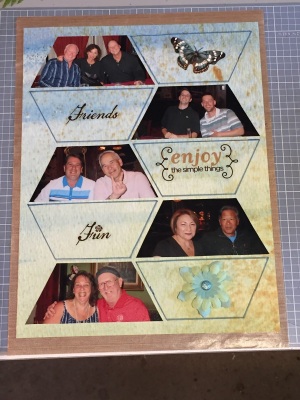 The next night we all get together for a pot luck.  Everyone brings an appetizer to share and we rotate hosting duties.  Some of us get 2 or 3 bedroom villas and it makes it easy to accommodate everyone.  Golf issues are discussed by the men but most of the time it is just catching up with each other to see what has been going on since the last September.

The final round of golf takes place on Friday morning and then we gather in the club house for the awards presentation and I take a picture of the winners.  Before everyone runs off until next year, I ask one of the staff to take a picture of our whole group together.

One year, as I was putting the album together, I realized that a stranger had come and photobombed our group picture!  We must look like a fun bunch to be with.

Since it is a vacation for me, I also take pictures of the different villas we stay in and the beautiful scenery.  Most of the villas are very well kept, although we have had one or two over the years that needed some upkeep.  When we find a good one, we try to get it again the next year. 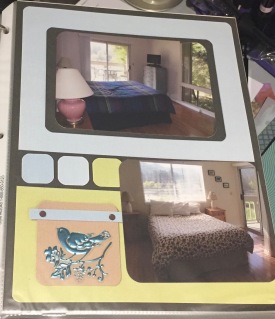 So far I have filled three scrapbooks and started a fourth! 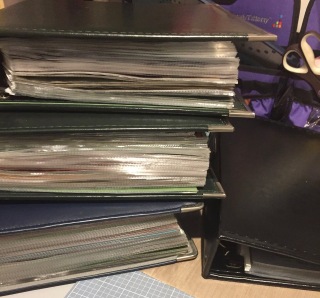 Tony is the “Commissioner” of the tournament and he writes a recap of the scoring and highlights each year.  I add that to the end of the layout for that year and my books have become a definite source of reference for the happenings over the years.  Someone always asks, “When did we first start coming down here?” or “Remember that time when…”

I really look forward to our September reunion and this year was no exception.  During the morning while the guys are golfing I sometimes bring my scrapbooking supplies and work on the albums.  This year I brought down a stack of magazines and went through them, pulling out the things I want to keep.  I went through 11 magazines and read through a book I had on blogging tips.
How about you?  Golf in any tournaments?  Have a “September family” that you see yearly?  Love to hear about it!