Just finished the book Act of Love by Paige Mitchell. 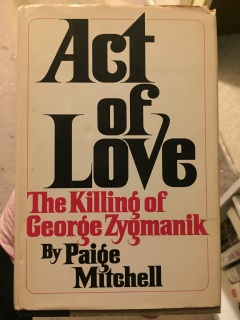 It was a book I had had on my shelf for 42 years!!! For the life of me I do not remember reading it before.  I know that I belonged to a book of the month club when I was younger and this was probably one of the books I got then but forgot about?  No wonder my husband complained every time that we moved that I had too many books!  Now that I’ve read it, it’s going to be donated to make space for more books…happy honey?
The story is true and is really thought provoking.  George Zygmanik was involved in a motorcycle accident that left him paralyzed from the neck down.  He begged his brother, Lester, to kill him.  He didn’t want to live that way.  George had a wife and a son.  He reportedly told his wife not to interfere.  The book tells the background of this family and the brother’s close relationship.  Their father had recently died as well.
Euthanasia, mercy killing, goes back to Ancient Greece and Rome but is not legal in most countries.  The attorney for Lester Zygmanik needed to try and find a way to make the jury believe that there was no other course of action for him to take.  I won’t give away the ending.
I am wondering if I would have the courage to do something like that.  My Catholic upbringing would definitely come into play here as well as the illegality of the act.  Hopefully I will never have to make that decision.
Tastefully written and not too legalese, it was an easy book to read, even if the story was hard to hear.

My next book is going to be something a lot lighter:

As I was entering it on my Goodreads list I read some of the reviews.  Not very many stars were given but it seems like some people were looking for specific techniques on how to think like Sherlock.  In the book there are quotes from the Sherlock stories and quizzes to take.  After reading “Act of Love” I’m not looking for anything heavy, just a lighthearted bridge to the next book.