I don’t know how other people do things but in our house we have a tough time deciding what’s for dinner.  In all actuality, we have never been a regular eat dinner together type family.  Part of that stems from the fact that during the first 15 years or so of our married life my husband had stomach issues in the form of ulcers that would wax and wane and finally he had to have two surgeries to help alleviate the problem.  It meant that I would make dinner but then his stomach would be bothering him so he wouldn’t be hungry.  I would end up with food that never got eaten or have to eat alone since he would be lying down.  Slowly but surely I got out of the habit of cooking dinners and would fix easy meals for the kids and I.

Fast forward to the present.  The kids are grown and out of the house so it is just my husband and I.  I am trying to lose weight and eat healthier so I am doing more planning, usually cooking four dinner meals at a time so I have them ready to go in the fridge.  I will make two chicken and two fish dinners for example. 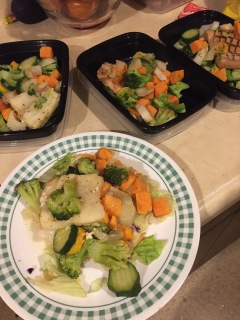 Unfortunately, these don’t exactly appeal to my husband so he will make his own dinners like ranch beans or chili, things that I don’t really like.  Sometimes we’ll get pizza or Chinese food delivered.
Still, there is the “What’s for dinner” question many nights.  Recently, I got an email from the Hungry Girl where she talked about Home Chef, the home delivery service, and if I used the link in her email I’d get $30 off the first order.  I figured we should give it a try.  Since it was endorsed by Hungry Girl, perhaps the meals would be healthier and by picking the meals in advance we could chose things we both might like.  We decided to try four meals.  I picked two and my husband picked two.
We got the first delivery yesterday. 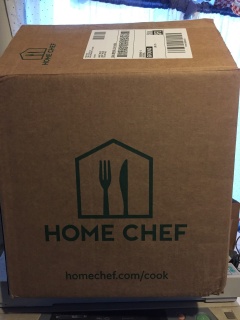 The box was well insulated and inside were the ingredients neatly packaged and labeled for the four meals we had chosen.  There was also recipe cards for each of the meals and a binder to keep them in.
We tried the first one tonight.  French Onion Shrimp and Grits.  This is what the packages looked like with the recipe card. 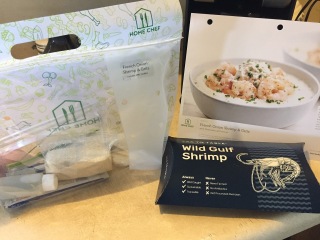 Inside the baggie were these ingredients.  The tiny bottle is the white wine for the sauce, butter, shallot, sour cream and in the baggies are the grits and parmesan cheese.  The green stems are chives for garnish.  Wow, I’m not used to garnishing my meals – fancy! 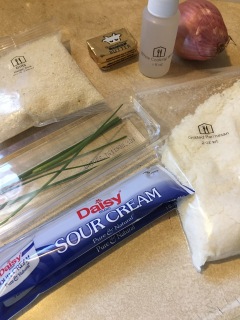 The only things needed to make the meal that were not included were water, olive oil, salt and pepper.  The recipe card had simple to follow, step-by-step instructions.  No fancy pans or cooking utensils were required.  Here is what my result was and the picture from the recipe card behind it. 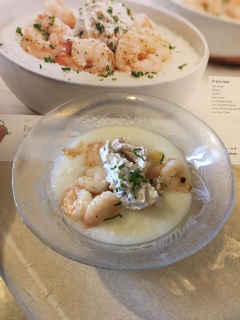 It’s not exactly the same but pretty close.  It was delicious!  We had never had grits before and were pleasantly surprised at the taste.  We both like shrimp and the caramelized shallots were yummy.  The recipe said it made two meals but I bet we could have stretched it to three as I had some grits leftover and I could have saved some shrimp and topping to go with it, but it was so good we didn’t!
All the nutritional info is given for each of the options so you could really tailor the menus you pick to your preferences as far as low fat or low cholesterol, etc.  They even have vegetarian meals so you could do that too.  Obviously, since you are cooking them yourself, you could change any part of it to suit your taste.  I followed the directions exactly for this meal so that I could give the company a fair chance.
I really like the flexibility of this program.  When you sign up you are asked about your taste preferences, whether you like meat or fish, vegetarian, low carb or low fat, etc.  They also ask if you would like to try advanced meals.  I chose simple!  They pre-pick the meals for you but you can swap them to others that are being offered for that week.  The choices are set up five weeks in advance so you can schedule a month of meals and forget it if you want.  You can choose some lunch type meals instead of dinners.  The dinner meals are $9.95 per serving and the lunch meals are $7.99.  Some of the meals can be increased to serve four instead of two.   You also have the option of adding a smoothie or a fruit basket with your order for $4.95 per serving.  We wanted more time to be able to try the ones we got so we decided to skip next week’s delivery.  It was really easy for me to go online to my account and do that.
If you think you might like to try this service, use my link to save $30 off your first order:
https://www.homechef.com/invite/XpxG2KuRbxLQ4
Have you tried any of the home delivery meal services?  Did you like them?  Share!