I just finished books by two gentleman that I have become friends with through the world of blogging.  Even though I used to tell my kids not to talk to strangers they may meet online, I’m pretty sure that I’m safe with these guys.

One is a new mystery series begun by James J. Cudney called The Braxton Campus Mysteries.  The first book in this series is “Academic Curveball.”  Baseball season is a few months away and I thought this book might give me the fix I need to bridge the gap.  I was captivated from the start as the murder happens pretty much in the beginning of the story.  I liked the characters and the action flowed smoothly from one scene to the next.  I didn’t figure out who done it until almost the very end, which is a good thing in my opinion.  If I could tell who did it right away, I wouldn’t want to continue reading.  Mr. Cudney has written his next book in the series already called “Broken Heart Attack.”  I am anxious to read this one to see what happens next as there was definitely a surprise ending to the first book.

Jay (I feel like I can call him that because he is such a friendly guy) can be found at his author website, but I found him last year on his This is My Truth Now site because he was doing a 365 series and I was doing a 365 picture project so it was kind of a natural for us to meet.  Jay has also written two other books, “Watching Glass Shatter,” a very interesting story about the Glass Family and a secret about the Glass brothers that comes to light when the patriarch of the family suddenly dies and “Father Figure” about two girls in different time periods whose lives become intertwined.  Jay used my name for one of the nasty characters in the book but I’ll forgive him for that as he swears he had the name picked before we started conversing.  I’ve read both and I’m telling you, this guy is one good storyteller!  His books can be found on Amazon.   You should get them all. 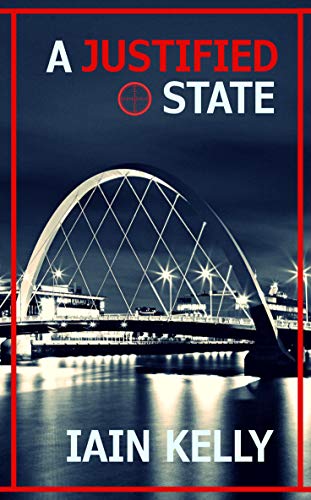 The next gentleman I came to know through the A to Z Challenge last year.  Iain Kelly was doing a detective story using the letters of the alphabet as seen on a child’s jigsaw puzzle.  I must admit I haven’t read that whole story yet but I’ve got it bookmarked to go back to.  Instead, I read his first novel, “A Justified State” which is a tale about a future in which there is no poverty or homelessness but overpopulation and an energy crisis threaten the stability of the country.  There is the hometown, weary detective who is still grieving the loss of his wife and children and cares for his elderly father, the mysterious government agent, the politicians and the tough female assassin who all do their jobs to make the story keep your interest.  My favorite quote from the book is:  “…sometimes it is healthy to be unhappy, to question decisions being made for us, to hold the State to account.”  A very true to the times sentiment in my opinion.

Iain can be found at his site, Iain Kelly Writing and he is a really good teller of tales with his 100 word stories based around a photograph and his cute couple, Agnes and Archie.  His book, “A Justified State” can also be found on Amazon.

It was because of these two authors that I decided to start using Kindle Unlimited.  I was previously only a “real book” reader but because these were available on Amazon for a reasonable price (free) I decided to take the plunge, at least until my free trial is over!  You should definitely check them both out and let me know what you think.