If you haven’t read that I am getting a studio in my backyard then you are seriously missing my posts and you better catch up!  I’ll give you a recap.

We have a really huge backyard and I WANT to say that since the kids are grown we don’t need all that room but TRUTHFULLY we never really utilized it much even when they were little.  I don’t know why.  In time it got to look like this:

We razed the worst section to the ground and it looked like this:

But then we could see we needed a new fence desperately.

So we had a new fence put in.  Thankfully the neighbors behind us helped with the cost.

Then the yard looked like this for a while.  You can see that the left side is still pretty much just dirt but the middle and right side has greenery.

The outside of our house looked pretty shabby and the roof was starting to leak in the kitchen so we decided it was time to spruce the mansion up a bit.

We had 21st Century come and give it a facelift.  They are an excellent company to work with and we highly recommend them. 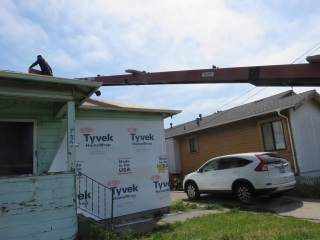 Quite a difference from the old to the new, but now the backyard was overgrown again. 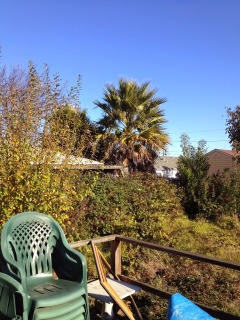 We decided that the bathroom was more important than the backyard at the time so we called our friends at 21st Century again and they did this:

But still the backyard looked like a hayfield or a jungle. 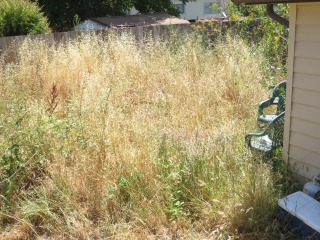 I tried to clear it myself since my husband has a bad back and can’t do this kind of work but after a whole day this is all I could manage. 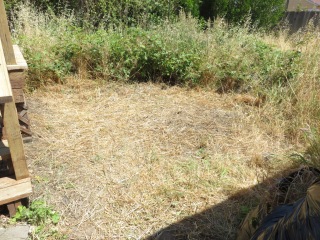 One more time we hired someone to come and raze it to ground zero status. 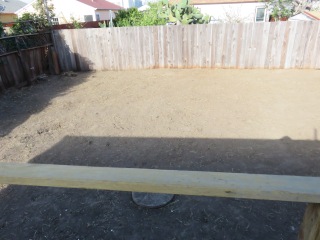 And we even had a tent in it so we could have a get together after our daughter’s graduation from college.  That tent is 10 x 10 just to give you an idea.

We also hired someone to come and keep the weeds and other things from growing back until we could decide what we wanted to do out there.  You need money for these kinds of projects and even if money did grow on trees, we no longer had any of either 🙂
That’s it for installment #1.  Hope you come back for Part 2.