L is for Loverboy.

Loverboy was one of the bands my husband and I saw in our very first concert together, Day on the Green, in 1982!  I don’t have any pictures from that concert but I did make a page in the album using the ticket stubs and pictures of a T-shirt Bill bought me, along with a picture of the promo poster.

Once we started going to concerts again, I wanted to try and catch the bands from that first show (except Iron Maiden – I’m not a fan of theirs).
We live just about an hour away from Santa Cruz Beach Boardwalk and they have free Friday night concerts on the beach.  In 2009 Loverboy was one of the groups playing so we decided to go see them.  Free is pretty inexpensive, right?

Well, not quite free since we took our girls with us and we went on some of the rides while we waited for the concert to start.

I have fun riding the rides too! 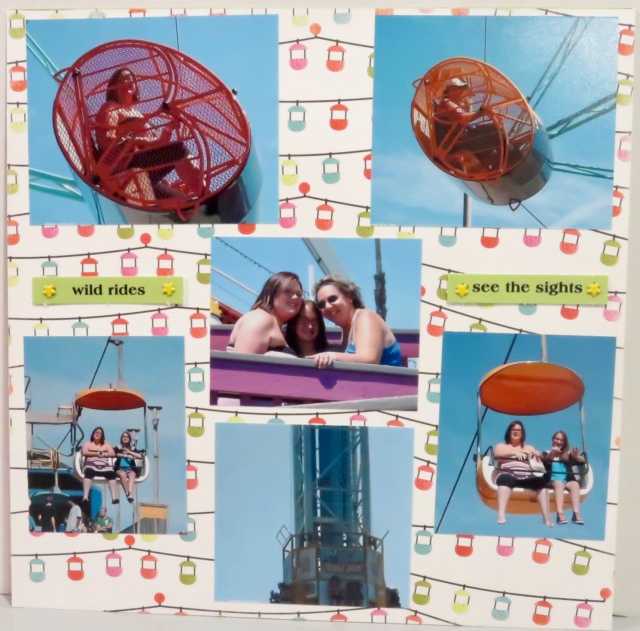 It was also a good chance for me to use some scrapbooking supplies that were not necessarily music related.  I had some papers from a summertime collection that had the tram rides on it and I used some beach-type embellishments like the starfish and shell.

There were tons of people on the beach but we watched the show from the railing on a walkway.  We were just about center stage and I didn’t mind standing (as opposed to getting all sandy from the beach).

I am really bummed though because after Loverboy had sung six or eight songs they said they had to take a break and leave the stage.  They said they would be back but I thought they would do the same songs over again and I knew we had an hour drive to get home so I said we should leave.  I found out later that they did different songs and that we should have stayed to see the rest.  I’ve been waiting for them to come around again, but so far I haven’t seen them playing near where we are.  If I find them, for sure I’m going to try to catch them.

And there’s L – Have you ever left a show thinking that it was over and it wasn’t?  See any free concerts at the beach?

You can click over to the main A to Z Challenge page to see what other participants have come up with for this letter, and come back to see what M has for us!