I’m using a song title for my letter again, J is for “Jessie’s Girl” by Rick Springfield.  We are at the Mountain Winery and although Springfield was the headliner, there were three other groups playing that night.  Tommy Tutone opened followed by Greg Kihn and then Loverboy.  Truthfully I think we went to see Loverboy but the whole show was a good one.  Because I’m already behind I’m just going to scrapbook the Rick Springfield pictures now.  The others will have to wait. 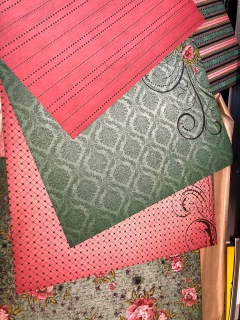 Even though I am not making pages for the other bands yet, I needed to include them on the title page.  I have some papers left so I’ll be able to use those for Tommy, Greg and Loverboy but will probably have to mix in others.  Good thing that kind of paper is not in short supply around here! 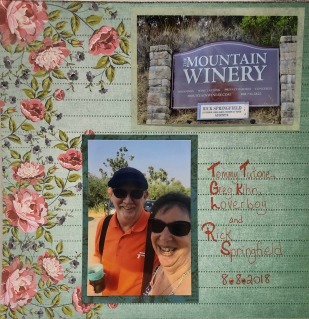 I used the stained glass template again but didn’t get quite as detailed with cutting up the pictures.  I put some Dazzles stickers in the corners.

He had a screen behind him which not all the acts at the Winery do.  Almost made it seem like he was at a bigger venue.  He also left the stage and went walking through the crowd.  That is always fun to see.

I used the “Arrows” stencil to sketch that. 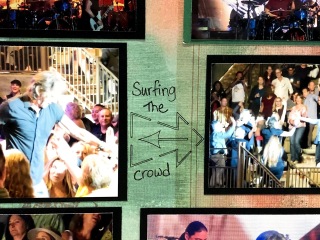 The drummer, Jorge Palacios, was pretty good.  Rick sang 12 songs.  I didn’t realize he had that many!  Did you know his real name is Richard Lewis Springthorpe?  I did not!

I used this Nuvo Glitter Drop to make a center in the flowers on the page. 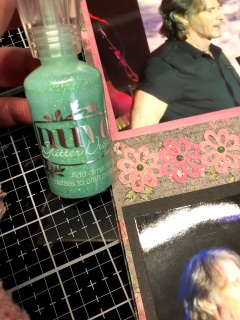 He had a really neat looking guitar on the stage before he came out so I had to grab a picture.

Saving the best for last, Jessie’s Girl was the encore.

And in the album it will look like this, almost, because I’ll fit the other bands in between these pages.

The paper on one of those pages is not from the original collection.  I added it to include some extra pictures.  Can you tell which one it is?

Here is “Jessie’s Girl” as we saw it.

The “joint” was certainly jumping that night.  (Joint is the Stream of Consciousness prompt for today.  Thanks Linda!)

I have to admit that I don’t have the rest of the alphabet already finished.  I’m going to try and do as much as I can with our “free” day tomorrow but I’m not holding out much hope that I’m going to make it.  I’ll continue with the alphabet as planned but the scrapbooking is going to be hit and miss.  Oh well, such is life, right?