One of the artists that has been around awhile but whom we’d never seen was Cher.  She said she was making a final tour in 2002 and then seems to continue to tour every few years.  When I saw she was going to be at SAP Center in San Jose, I was determined to see her.  Once again, our seats were not the up close and personal that I like to get, but we were able to see her and the monitors so I managed to get some good pictures.  Cyndi Lauper was her opening act, so she gets showcased as well for the letter C.

Once again, I started with a search for papers that would complement the photos.

This paper is also from Paper Wishes and is called Mirage Double-Sided paper.  I thought the name of the paper matched as well, since Cher changed her outfit with almost every song and had a lot of circus-type stuff going on behind her during the show.

I used another template from Lea France, this time the “Say Cheese!” stencil.  In addition I used it twice, turning it sideways for one page, thereby creating a totally different look for each page.  On the first page, the one of Cyndi Lauper, I backed the pictures with a large black sheet, cut in the main shape of a camera. 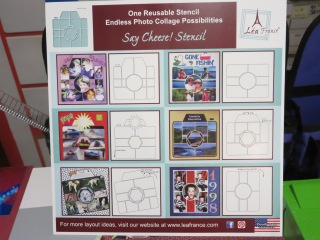 On the Cher page, I left the background alone and just added some stickers.  That’s what makes these templates so useful.  You can do many different things with them.  If you look closely, you can tell that I switched paper from the picture above to the final one below.  That’s another part of the process.  Once the pictures are placed, I don’t always like my first choice of background paper.

Sometimes when I have small things that I want to attach to a page, I use this Xyron sticker maker.  It’s like magic.

Here are the finished pages.  I managed another 10 for this concert!

It was kind of funny because Cyndi Lauper stopped one of her songs in the middle to take a camera away from somebody in the front row.  She asked him if he was video taping her and she told him to stop looking through the camera and live in the moment!  At that point I was glad I wasn’t sitting closer!

As I said, Cher changed outfits with almost every song and had a whole circus going on behind her, including acrobats flying above and sword swallowers!

She even had a trojan horse! 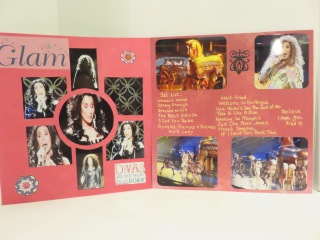 She did a lot of chatting with the audience too, commenting on how old she was and yet how she cold still get into her “If I Could Turn Back Time” outfit (“Take that Katy Perry!” she said).  She did look pretty darn good for 68!

She said she couldn’t do a concert without mentioning Sonny and did a virtual duet with him, showing footage of them from their early years.  It was quite touching.  For the final number she got up on this little platform that was attached to pulleys and glided her way around the arena, singing and waving to her fans.  I’m so glad we got to see her.

And there we have C for Cher (and Cyndi Lauper).  Hope you enjoyed the show 🙂  Feel free to leave me a comment.  I love them!  Also, click on one of my “follow” links so you don’t miss any of the alphabet!

You can click over to the main A to Z Challenge page to see what other participants have come up with for this letter, and come back to see what D has for us!